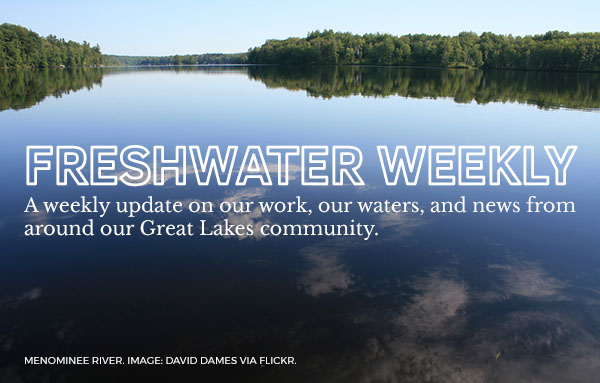 BUDGET SUCCESSES IN US AND CANADA

The US Omnibus bill adopted by Congress on March 23 maintained stable funding for the EPA and several policy riders were erased.  Because of Freshwater Future members like you that contacted their elected officials, the 30% cut to EPA was removed as well as the harmful policy riders that would have put our drinking water at risk, made it easier for polluters to dump or dredge wetlands, and eliminate agencies abilities to consider the effects of climate change.  Thank you for helping!

Ontario’s proposed budget for 2018, released last week, includes an additional $52 million over 3 years for the Great Lakes. This more than doubles the current annual budget – a necessary increase to finally address the growing problem of algal blooms in Lake Erie and other issues such as toxic chemicals, microplastics, and road salt. The province also committed $15 million in new spending for natural-heritage systems including wetlands, lakes and rivers. We look forward to working with the government of Ontario to make freshwater safer for people and wildlife.

POLLUTION IN THE STRAITS

Over 500 gallons of a potentially toxic synthetic coolant leaked from electrical power cables in Michigan’s Straits of Mackinac after sustaining damaged. The company is vacuuming remaining coolant from the lines and the Coast Guard is on-site to assist with clean-up of any material that does surface.  The release of the coolant highlights the risky conditions that exist everyday in the waterway between Lake Huron and Lake Michigan, and how typical wintry weather can delay response actions, emphasizing the vulnerability of the Straits ecosystem.

Every year Freshwater Future honors some of the dedicated people who devote themselves to protecting the waters in their Great Lakes communities.  The eight recipients this year are incredibly inspiring to us and we encourage you to read about their actions in our most recent Freshwater Voices newsletter.