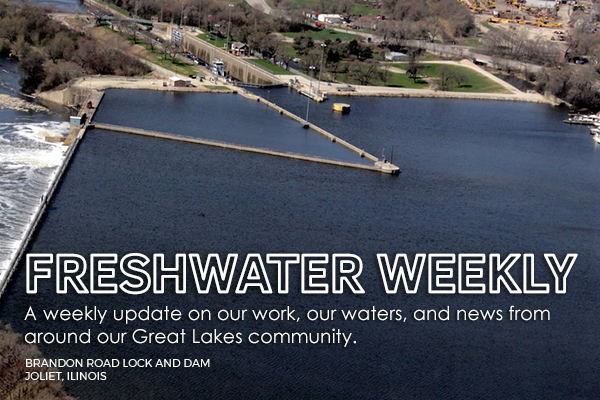 The Conservatives garnered 41% of the vote, winning 76 of 124 seats in the province. Andrea Horwath’s New Democrats will form the official opposition with 40 seats, while Kathleen Wynne’s Liberals lost official party status with only 7 seats. In a first, the Green Party also secured their first-ever seat with leader Mike Schreiner winning in Guelph. Final results are still pending. Freshwater Future Canada will work with the new government where we can on freshwater priorities, and we applaud every Ontarian who made their voice heard in yesterday’s election.

U.S. House Passes Water Bill With Measures for Effort Against Asian Carp in the Great Lakes

The Water Resources Development Act passed the U.S. House of Representatives by a 408 to 2 margin. It contained an amendment authored by Rep. Dave Joyce (R-OH 14) that would require the Army Corps of Engineers to produce its final report in February 2019, rather than the delayed date announced by the Corps. The initial study recommended building multiple structural impediments near the Brandon Road Lock and Dam in Illinois to keep several voracious asian carp species from escaping the Mississippi River system into the Great Lakes. The $275 million set of renovations has enthusiastic support from several Great Lakes states, who have offered to share in the cost of construction. Most experts agree that the Brandon Road Lock and Dam is the most likely point of entry for asian carp species, and activists and groups—including Freshwater Future—support swift and immediate action to reduce the risk of transfer.

After EPA Objections, Michigan’s Back 40 Mine Receives Final Permit from DEQ

On Monday, the Michigan Department of Environmental Quality (DEQ) announced that it has issued a wetlands permit—the final permit needed—for the Aquila Resources Back Forty mining project in the Upper Peninsula. The DEQ had previously issued mining, air, and surface water discharge permits for the project.

This final permit was awarded despite objection from the DEQ’s own Water Resources staff. According to the agency’s “Findings of Fact,” the Water Resources Division states that Aquila’s permit application and materials did NOT demonstrate that the project could avoid “an unacceptable disruption” to aquatic resources and that the project is inconsistent with the permitting criteria. Furthermore, the DEQ awarded the permit without fully addressing the EPA-authored objection letter sent by federal agencies charged with enforcing the Clean Water Act. According to the DEQ, the wetland permit is awarded “conditionally” and requires the “submission and approval” of additional data and information, including “revised hydrologic modeling, an adaptive management plan, a comprehensive monitoring plan, and requisite wetland and stream mitigation.” Under the Clean Water Act, this information must be provided before a permit may be granted.

Local environmental groups Front 40 and Mining Action Group (MAG) of the Upper Peninsula Environmental Coalition (UPEC)—both Freshwater Future members and grant recipients—were instrumental in exposing gaps and flaws in the project’s permit applications. Check out their take on the DEQ’s decision here. While Michigan law limited the the impact of their work, their persistence and expertise have lessened the risk of this mine and given the public valuable oversight opportunities as the project moves forward. Freshwater Future is proud to have funded and supported the work of Front 40 and the Mining Action Group.

10 Ways You Can Prevent Invasive Species

Summer weather has descended upon the Great Lakes and with it millions of residents and tourists—boats, kayaks, paddle boards, and swimsuits in tow. With all that movement comes an increased risk for spreading nuisance invasive species like Asian carp, eurasian milfoil, emerald ash borer, and non-native cattails. Check out our newest blog post on the best ways YOU can prevent the spread of invasive species this summer.

Ways to Make a Difference

There are lots of simple ways to help protect our waters. Find more at freshwaterfuture.org/take-action.