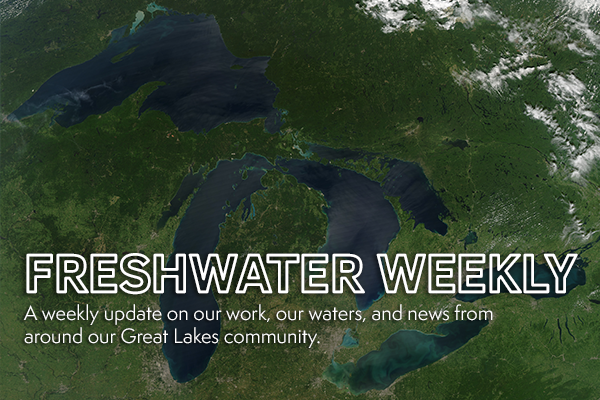 Steady rain early this week had residents wading through waterlogged streets and dealing with transit delays for the third time in several weeks. Since the beginning of August, 148 millimetres of rain have fallen on the city, according to Environment Canada. As systems become overwhelmed and city streets fill with water, that excess often spills out into Lake Ontario. We reported last week that the city’s last raw sewage overflow event caused bacteria levels in the city’s harbourfront to soar “off the charts.” Sewer and stormwater overflow can include everything from used condoms and plastic tampon applicators to mounds of shredded toilet paper and plenty of unidentifiable solids.

Experts say Toronto’s density and decades-old sewer system are two top contributors to sewer and stormwater overflow. Moving forward, the city is investing $3.1 billion for stormwater management upgrades, and has amended bylaws to encourage the installation of “green roofs” that have the ability to capture and process an average of 70 percent of rainfall. The city also encourages residents to use Toronto’s basement flooding protection subsidy program, which offers single-family, duplex, and triplex residential homes a subsidy of up to $3,400 per property to install flood protection devices.

Since the mid-20th century, 8 billion tons of plastic have been manufactured, and when it’s thrown away, much of it crumbles into small pieces. Researchers call these “microplastics,” which are defined as objects smaller than 5 millimeters—about the size of a letter on your computer keyboard.

Recently, we’ve been reporting on the burgeoning science of plastic pollution in the Great Lakes, as more inquiries are made on where used plastic ends up, where it comes from, and how it moves about the environment. Chelsea Rochman, an ecologist at the University of Toronto, is one of the leading researchers on this emerging field of study. Check out this article and interviewwith Chelsea on Great Lakes Today to find out more about what we do and don’t know about microplastics in our waters.

Representatives from federal agencies, Enbridge, and industry and environmental groups testified on Line 5, oil spill prevention and preparedness at a Senate Commerce Committee field hearing in Traverse City, Michigan on Monday. Senator Gary Peters’ (D-MI) questions covered the condition of the pipeline, whether or not Michigan needs or greatly benefits from its existence, and the logistics of a possible decommission.

Peters was highly critical of Line 5 operator Enbridge Inc., citing the severe trust deficit felt throughout the state after Enbridge’s past incidents—including the Kalamazoo oil spill in 2010. When the Senator confronted David Bryson, Senior VP of Operations for Liquid Pipelines at Enbridge, he received roaring applause from the overwhelmingly supportive crowd.

Enbridge did say at one point during the hearing that they would release video and images showing damage to Line 5 from the anchor strike in April, although no details on when or how were given. You can watch the full hearing on the Senate Commerce, Science, and Transportation Committee’s website.

Although now largely dissipated, the scummy residue on the Lake’s surface across 50 miles of shoreline near Superior, Wisconsin raised more than a few eyebrows. Lake Superior is deep, cold, clear, and generally very low-nutrient, meaning algal blooms are rare. 2012 was the first year a bloom of blue-green algae was detected in Lake Superior. This occured after 10 inches of rain overwhelmed Duluth, Minnesota and the surrounding region, sending a plume of brown sediment into the lake. Storms in northern Wisconsin spurred another round of flooding, sediment dumping, and resulting algal bloom in 2016. And it happened again after this year’s historic June storms in Michigan’s Upper Peninsula, northern Wisconsin, and northeastern Minnesota. This last bloom was the largest observed.

Researchers don’t yet know whether this most recent Lake Superior bloom was toxic. In the meantime, scientists say there’s no need to worry: the blooms that have occurred thus far are very small and have had a negligible impact on water quality. However, blue-green algae has grown more commonplace in the Great Lakes region alongside warming lake temperatures and an increase in phosphorus and nitrogen runoff. Lake Superior hasn’t escaped these trends, and researchers warn that runoff and resulting algal blooms will be more commonplace in the future.