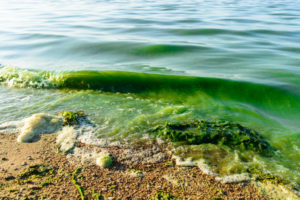 Toxic algal blooms on Lake Erie right now are as bad as we’ve seen them all summer. The bloom now covers almost all of the lake’s western basin along the Michigan and Ohio shorelines and extends offshore into the central basin and northeast to the Ontario coast. These conditions serve as a harsh reminder that not enough is being done to address the runoff pollution that causes these toxic algal blooms every year. . You can read our media statement below.

Toronto, Ont. – This morning, the U.S. National Oceanic and Atmospheric Administration (NOAA) reported that a toxic algae bloom has extended along Ontario’s northwest coast of Lake Erie. This latest bloom is another reminder that more urgent action is needed to improve the health of the lake.

“Year after year, Lake Erie is getting slimed over by algae blooms. These blooms kill fish, and threaten human health. This needs to stop,” said Ashley Wallis, Water Program Manager with Environmental Defence. “The federal and Ontario governments need to step-up and develop, implement, and finance a comprehensive plan for the lake.”

Although algae is a normal and essential part of lake ecosystems, too much algae can pollute beaches, clog water intake pipes, kill fish, and put human health at risk. One of the main causes of the blooms is runoff pollution from agricultural lands, which happens when rain and snowmelt flush fertilizers and manure from farms into waterways.

“When excess nutrients end up in the lake, they cause algae to grow out of control and turn the water a nasty shade of green,” said Raj Gill with the Canadian Freshwater Alliance. “But the problem isn’t just cosmetic. Toxins produced by harmful algae can make the water unsafe for humans to drink or even touch.”

This spring, the federal and Ontario governments released a draft plan for reducing nutrient runoff entering Lake Erie. However, the draft plan proposes few new activities or approaches to reduce runoff from agricultural and rural areas. It also lacks timelines and performance metrics needed to keep the plan on track.

“We can’t continue to do the same thing and expect different results,” said Nancy Goucher with Freshwater Future. “We need to improve laws to reduce nutrient pollution and make investments that help farmers follow those laws and implement on-the-ground solutions”.

The groups hope that governments will move quickly to reduce the runoff pollution causing these frequent and severe algae blooms that threaten the health of the lake, and the businesses, communities, and aquatic life that rely on it.