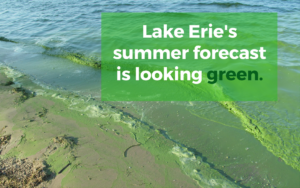 How serious is Ontario about addressing algal blooms on Lake Erie? While the Premier of Ontario (along with the Governors of Ohio and Michigan) has committed to meet nutrient reduction targets by 2025, the province’s weak wetland strategy released last week calls this commitment into question.

Summers on Lake Erie can be magnificent. Plenty of gorgeous beaches, marinas and quaint towns draw hundreds of thousands of tourists each year. Hundreds of cottages dot the shoreline of the lake, which also supports one of the world’s largest walleye fisheries in the world.

However, each year algal blooms – which can be toxic – threaten the health of this economy and the recreational value of the lake. Lake Erie’s algal blooms are caused when too much phosphorus – mostly from agricultural fields – runs off the land and into the water. These nutrients feed the algae that naturally occur in the lake. Toxic blooms can make water unsafe to drink and swim in.

Wetlands are a critical part of the solution. They help to absorb nutrients like phosphorus from the landscape before they get into the streams and lakes. Protecting wetlands from development is one of the easiest things we can do to prevent algal blooms.

Despite knowing their importance, even today, we continue to destroy wetlands. They are being converted into farmland or housing. In the western part of the Lake Erie basin, we’ve already lost upwards of 85% of the wetlands (according to the Wetland Strategy) and the trend is not improving. A recent study from the University of Waterloo shows a direct link between protecting wetlands (even small ones) and preventing algae blooms.

And yet, Ontario’s new Wetland Strategy, released July 20, 2017, allows for ongoing wetland loss in southern Ontario until 2025. It doesn’t plan for a gain in wetlands until 2030 – thirteen years from now.

Meeting the nutrient reduction target required to restore the health of Lake Erie isn’t going to be easy, but Ontario just made that task that much more difficult by failing to protect the few existing wetlands we have left in the watershed. Ontario is going to need to do more to protect its wetlands if we are going to have safe drinking water that supports lively tourism and fishing industries.