For This Retired Teacher, Lake Erie is Home 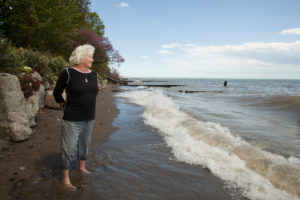 When JoAnne Chrysler was a teacher, she told her students that Lake Erie was her backyard. And she wasn’t joking.

For almost 30 years, the Chatham-Kent, Ont. resident and retired teacher has lived in a cottage turned into an all-year-round home on the shores of Lake Erie. Most days, you can find JoAnne walking along the beach picking up beach glass, while her golden retriever, Kuta collects stones. During the summer, you can also find her swimming—her favourite activity to do in the water.

One of her favourite seasons by the lake is winter, when ice formations start to appear and create volcano-like shapes that spit out water. A couple of years ago, the lake even froze solid, and Joanne, her husband, and Kuta went out on the ice to play Frisbee.

But what amazes JoAnne the most is the sounds that the lake makes, when it gets colder.

“That’s when it’s really quiet. That’s when you know it’s winter… when you don’t hear the waves anymore,” she added.

‘The water was so green’

As someone who spends a lot of time by the lake, JoAnne keeps a close eye on its health. And over the past several years, she’s become increasingly concerned about the algae blooms occurring in the water.

About five years ago, on her 60th birthday, her family took her out for a boat ride along the shoreline, and the lake was thick with algae. “The water was so green. It was just terrible,” she recalled, adding she was worried about her dog, which was small at the time, getting close to the water.

Even though she hasn’t seen algae blooms on the lake that bad since, she is still concerned about the health and the future of Lake Erie. For her, people need to care about the lake, because communities like hers rely on it for drinking water and so much more.

“There are so many people who make their living, or provide food for their families by the fish from the lake,” she said.

Keeping Lake Erie clean will help sustain the local business and anglers that rely on the lake. It will also allow JoAnne to continue doing what she loves: going for a dip or spending time with Kuta by the water.