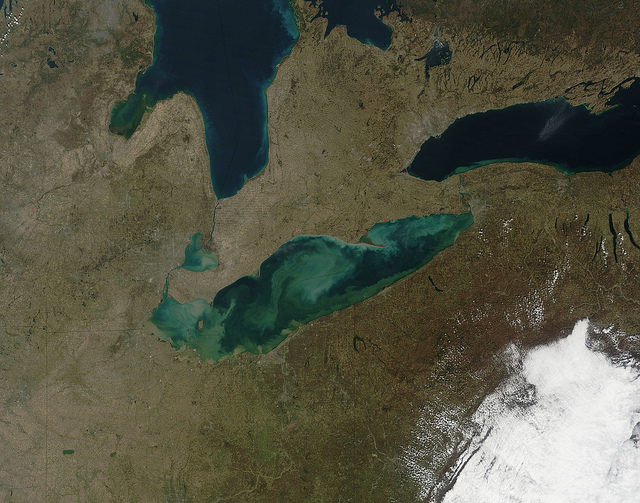 Today, the Governments of Canada and the United States released new targets to reduce toxic and nuisance algae blooms affecting Lake Erie. This is a big deal and means that we can now turn our attention to developing strong and effective Domestic Action Plans that will turn this into real action on the ground. Our sister organization Freshwater Future is working with organizations across the western Lake Erie basin to inspire action. We worked with them to prepare the following response to today’s announcement.

WASHINGTON D.C. (February 22, 2016) – Environmental and conservation groups throughout the Great Lakes region were encouraged by targets for combating Lake Erie algal blooms that were released by US EPA and Environment Canada today. The targets outlined represent the current scientific consensus on what is required to prevent toxic and nuisance algal blooms from continuing to plague Lake Erie.

US EPA release can be found here.

The growing annual threat of harmful algal blooms in Lake Erie has become a top concern throughout the region. Blooms threaten drinking water supplies and increase the cost of water treatment. They are also known to foul beaches, harm wildlife, and prevent access to the lake for many recreational activities.

Today’s bi-national targets focus on reducing the flow of runoff pollution into the western and central basins of Lake Erie—where the negative impacts of harmful algal blooms and oxygen depletion have been most pronounced. These recommendations match commitments made in the summer of 2015 by the Governors of Michigan and Ohio and the Premier of Ontario.Despite these important steps, we would like to see targets set for the eastern portion of Lake Erie as soon as possible.

In the summer of 2015, Lake Erie was afflicted by the largest algal bloom ever recorded and in 2014 a harmful algal bloom poisoned the drinking water of more than 400,000 people in Toledo, Ohio and put 90 per cent of the private wells on Pelee Island, Ontario at risk for more than two weeks. In 2011, microcystin—a toxin created by cyanobacteria and often found during extreme algal blooms—was recorded in the open waters of Lake Erie at concentrations 50 times higher than World Health Organization limits for safe body contact, and 1,200 times higher than the limit for human consumption.

While runoff from cities, failing septic systems and sewage overflows are known to contribute to algal growth, scientists agree that the leading cause of harmful algal blooms is runoff pollution from agriculture. Agricultural runoff pollution occurs when rain and snowmelt flush excess fertilizers and manure off of farm fields and into streams and rivers. Those streams then carry the nutrient-rich fertilizers and manure into Lake Erie where they end up feeding the growth of algae rather than the crops for which they were intended.

The targets released today set the stage for Environment Canada and US EPA to develop Domestic Action Plans—specific national strategies for achieving the needed reductions in runoff pollution—ahead of a 2018 deadline.

“The targets released today by US EPA and Environment Canada should put us on track to address the chronic threat of toxic algae in Lake Erie,” said Lisa Wozniak, executive director for Michigan LCV. “Now it’s up to our state, provincial and local leaders to take the necessary steps to hit these targets as soon as possible, before the health of another Great Lakes community is threatened by tainted drinking water.”

“The adoption of the phosphorus reduction loading targets for Lake Erie is a critical step towards the restoration of Lake Erie,” said Mike Shriberg, regional executive director for the National Wildlife Federation. “Collective agreement on the targets on both sides of the border positions all parties for coordinated action on meeting the shared goal of a healthy Lake Erie.”

“The binational targets established today by Environment Canada and the US EPA mark a significant milestone in the two countries’ joint efforts to address the algal blooms plaguing Lake Erie,” said Tony Maas, Manager of Strategy with Freshwater Future. “Engaging communities on both sides of the border will be critical to ensuring the action plans developed to achieve the targets reflect the perspectives of the people impacted by the problems and solutions.”

“Today, U.S. EPA and Environment Canada’s release of nutrient reduction targets for western and central Lake Erie are on the mark to restore the lake,” said Alliance for the Great Lakes Vice President for Policy Molly Flanagan. “However, targets by themselves will not change the future of Lake Erie. The U.S. EPA and Environment Canada must take a strong role in providing regional support and, when necessary, enforcement to ensure the states do what is needed to meet the targets released today.”

“Reducing Lake Erie’s phosphorus pollution is paramount to ensuring Ohio residents have safe water,” said Adam Rissien, Ohio Environmental Council’s Agricultural and Water Policy Director. “It is also essential for securing our state’s $12.9 billion dollar Lake Erie recreation and tourism industry. The targets finalized today establish a clear number that will help achieve this goal. Now, the people of Ohio expect to see an effective plan to reach these targets, which requires identifying where the pollution originates and how to reduce each source.”

“Lake Erie provides drinking water for millions of people on both sides of the Canada-U.S. border. Finalizing the bi-national phosphorus reduction targets on time is an important step forward to restoring the health of Lake Erie,” said Natalija Fisher, Water Program Manager with Environmental Defence. “Now, well-resourced, timely, and thorough action plans are needed to help ensure these targets are met and that the problem of algal blooms is effectively tackled.”